There is no species of tree peony native to Japan. Historians date the arrival of the tree peonies (known as Botan in Japanese) in Japan to the 8th century CE. Historians agree that it was Buddhist monks, whether Chinese or Japanese is a matter of dispute, that were responsible for transporting tree peonies to Japan. In this context, tree peonies were not seen as an ornamental garden plant, but rather as an important medicinal plant. Tree peonies were part of the great flow of goods and ideas from China to Japan.

Over the next few hundred years, tree peonies were planted in temple and court gardens as ornamental plants, but it was not until the Edo period (1603 to 1868) that their cultivation became widespread. The advent of grafting as the main propagation technique during this period is largely responsible for the rapid spread of tree peony cultivation. The main center of cultivation and propagation became the cities of Tokyo and Kyoto as well as the western coastal prefectures ofNiigata and Shimane.

Peonies at Hyakken – this 1866 woodblock print by Utagawa Shigenobu depicts the tree peonies at a famous public garden in Tokyo.

Viewing the tree peonies in Tokyo. Hand-colored photograph, circa 1910.

Beginning in the mid-19th century, Japanese tree peonies began to appear in western European botanical gardens. By the 1890s, several large nurseries based in Japan were exporting large quantities of tree peonies to both Europe and the United States.

The Yokohama Nursery was know for its large selection of tree peonies, irises and lilies. This nursery exported to the United States from the early 1900s until the eve of World War 2. 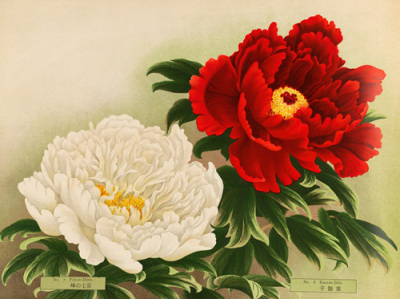 A little aside: For those who think that tree peonies are expensive, consider that a vintage catalog from Yokohama nursery costs $5,500 from a rare book dealer. Real Japanese tree peonies, priced on our website starting at $79 are cheap by comparison!

From their first introduction into the United States over one hundred years ago, there has been much confusion amongst nursery professionals and collectors regarding the correct identification of Japanese tree peonies.  In his 1962 book,The Peonies, the grower John C. Wister gave vent to this frustration:

“Our troubles [in correctly identifying Japanese tree peony cultivars] have been by the carelessness or unscrupulousness of some Japanese nurseryman. The principle exporters of the 1910-1925 era would sell a collection of fifty varieties with fifty different labels and all but two or three plants would prove identical. The same firm would send fifty plants of one special white variety and the flowers would bloom pink, scarlet, and purple.” 'Joy of Longevity' 島根長壽樂 Shimane Chojuraku is a cultivar from the famous peony growing island of Shimane. 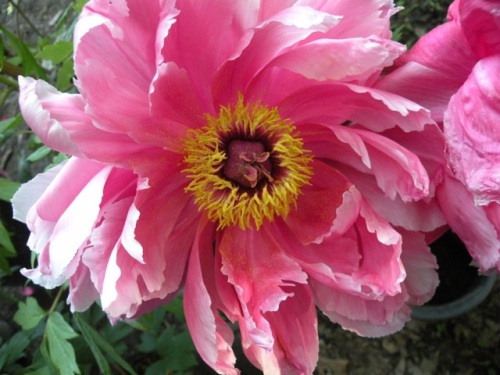 ‘Seven Gods of Good Fortune‘ Shin Shichifukujin is one of our most vibrant dark pink Japanese tree peonies. 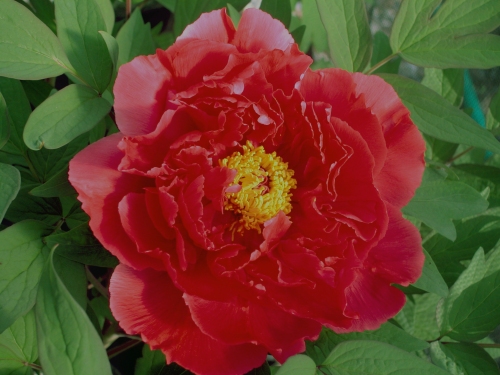 ‘The Sun‘ Taiyo this is perhaps the brightest red tree peony in our entire collection.

This plant well illustrates the tendency of Japanese tree peonies to grow in a upright, and not bushy, manner.

There are some notable exceptions to the rule that most Japanese tree peonies are semi-double. A few varieties are fine doubles while there is a whole subset of semi-double flowers which is know as jishi or lion form. There flowers are said to have the look of the tousled, unkempt main of a lion. 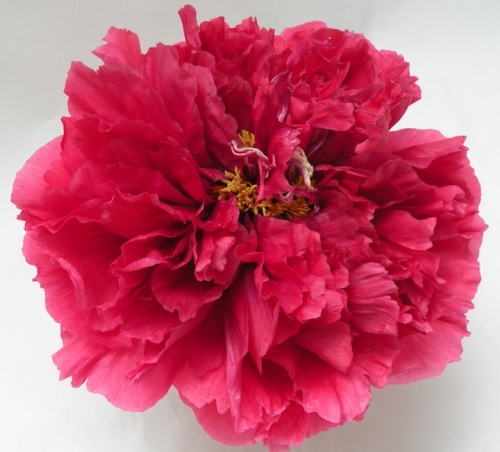 ‘King of Flowers‘ 花王 Kao is a rare Japanese tree peony which blooms in a fully double form.

‘Monitor of the Palace at Sunrise’ Fusotsukasa is another double form Japanese tree peony. 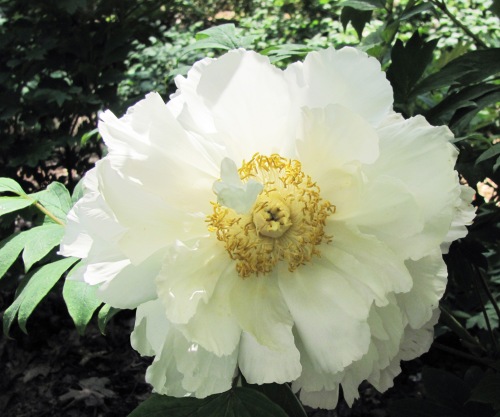 ‘White Jade Lion’ 白玉獅子 Hakuojishi is a variety which is said to bloom in the ‘lion’s main’ form.

A bed of Japanese tree peonies in full bloom at Cricket Hill Garden.

There is an interesting subsection of Japanese tree peonies known as Kan Botanor ‘Winter Blooming’ tree peonies. This type of tree peony blooms in the spring, and then, depending on the variety, re-blooms from November to January. The flowers in the winter are much smaller and the plant only produces a few leaves. These unique cultivars are said to date to the 1700s.

Winter blooming tree peonies are protected by straw mats in Japan. This photo show a tree peony blooming in a Tokyo park in December!

Winter Blooming tree peonies seems to have been developed to suit the unique climates of certain areas of Japan. We do not know of any growers who have successfully cultivated Kan Botan here in the United States.

This great video shows winter blooming peonies at a flower garden that is part of a Shinto Shrine, Hakozaki Shrine in Fukuoka City, Kyushu, Japan.

In the 20th century, Japanese plant hybridizers such as Toichi Itoh were the first to successfully cross a tree peony with a herbaceous peony, creating a third type of peony known as an intersectional peonies.

The one exception is the early blooming Paeonia japonica.

As in China, herbaceous peonies are not held in quite as high esteem as tree peonies in Japan. 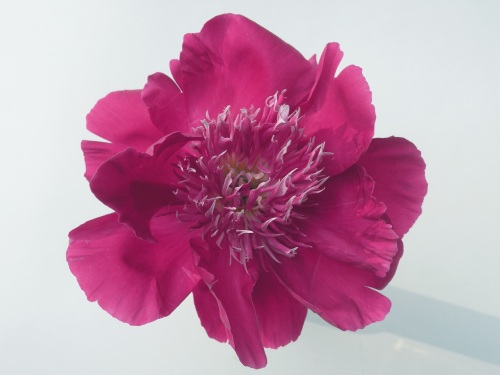