We are open! Click here to read our message regarding COVID19 and visiting the nursery this spring.

Each year, in the northern Chinese city of Taiyuan “when the seven stars of the Big Dipper point to the southeast” a tree peony blooms at the Twin Pagoda Temple. This has happened every April for the last four hundred years. 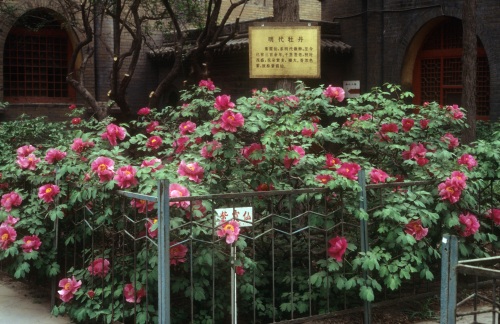 This tree peony was planted over 400 years ago. It is 5′ tall and 10′ wide, and has hundreds of blossoms each spring.

Taiyuan is the provincial capital of Shanxi province, located about 325 miles southwest of Beijing. Today it is a smoggy industrial town, which remains conspicuously less wealthy than other large Chinese cities. The economy of Shanxi is primarily derived from the province’s enormous deposits of coal, which is mined to power the manufacturing hubs located on the more prosperous eastern coast. The air in Taiyuan is heavy and acrid, and it is certainly not a popular destination for the average tourist. However, located there is an absolute peony treasure.

The city of Taiyuan is located in the heart of China’s coal country.

Located in the heart of old Taiyuan city, is the Twin Pagoda Temple. This complex of buildings was constructed in the Ming Dynasty during the reign of the emperor Wan Li (1572-1620) and was used as an examination hall for the Imperial civil service exam.  Passing this examination and becoming a civil administrator was the height of achievement for the ruling gentry class. 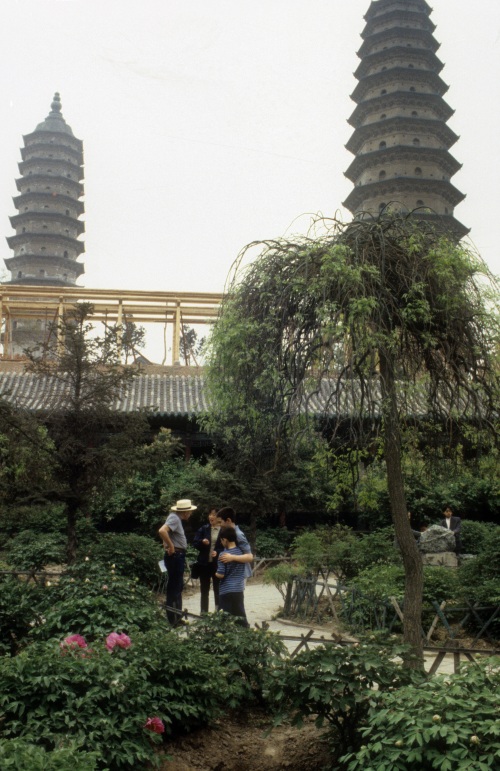 Amongst the grit and grime of modern Taiyuan, the Twin Pagoda Temple complex is a sanctuary of calm and beauty.

When the temple complex was constructed, tree peonies were planted in the main courtyard between the two pagodas.

Besides the main specimen, many clones have been propagated from it, filling the courtyard with blooms for a few short weeks each April.

One of these tree peonies, variously translated as “Glowing Purple Clouds of the Immortals” or “Fairy’s Glow” (Zi Xia Xian 紫霞仙) has survived to the present day and blooms gloriously with hundreds of heavily scented  flowers each spring.

The blossoms of “Glowing Purple Clouds of the Immortals” are about 8” diameter, with velvety petals and lush fragrance.

In the first half of the 20th century an inordinate amount of upheaval, destruction and suffering descended upon the land and people China. During World War II, Chinese troops and resistance fighters encamped on the grounds of the Twin Pagoda Temple. Japanese planes bombed the complex, destroying the iconic twin pagodas and many of the buildings. Amazingly the peonies survived, and have even flourished. 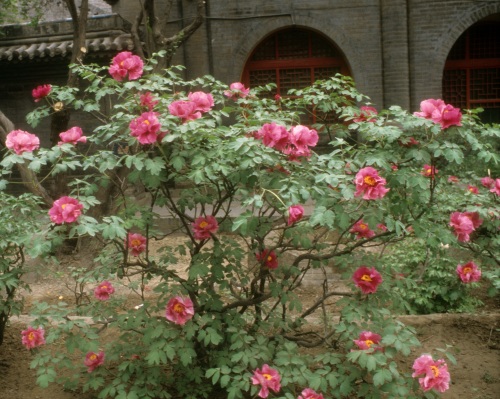 One of ‘younger’ specimens of Zi Xia Xian. Throughout the tumult of modern Chinese history, the “Glowing Purple Clouds of the Immortals” have endured.

After the war, the pagodas were rebuilt and the complex restored to some degree. When we visited several years ago, the new director of Twin Pagoda Temple Museum, Zhang Hong, was overseeing an elaborate restoration of the entire complex with its intricately carved details and colorful paintings. The traditional covered walkway was then just nearing completion.  If you ever find yourself in northern China during early April, we cannot recommend enough a trip to Taiyuan and the Twin Pagoda Temple to see the spectacular 400 year old peonies in full glory.