As the fall planting season approaches, we are thinking about were to plant a few new tree and herbaceous peonies, as well as moving some overcrowded older tree peonies to more suitable locations. Planning new areas of the garden or renovating older sections requires some imagination and a knowledge of your soil and conditions. How much sun do you have? At least 6 hours?  It is work, but it is fun as you imagine how spectacular the blooms themselves will be and how the plants interact with the rest of the landscape.

In planning your own garden, its may be interesting to consider how peonies are treated in China and Japan versus how they are traditionally used in landscapes in western Europe and America.  In both east Asia, western Europe and America,  all types of peonies play an important role in the spring garden. There is a distinction in how they are used, whether they are showcased or planted as part of ‘mixed’ border.

In China, and to a slightly lesser extent Japan, peony flowers, and particularly tree peony flowers, are held up as the ideal, unsurpassed by any other flowering plant. This judgement was rendered hundreds of years ago by Chinese literati; poets and painters, and has in China become part of the cultural lore. This is why tree peonies are the national flower of China. As a result, whole gardens in China are devoted to tree peonies, especially in Louyang, Beijing, Shanghai and Heze. Many of these older public gardens were formally private, belonging to wealthy gentry, which were only opened to the “people” after the 1949 Communist revolution in China. Private garden culture as we know it in the U.S. does not exist in Chinese cities, space is valuable and many millions of people live in modern highrise apartments and condominiums. Chinese farmers in the countryside would grow a peony or two, but growing space is too valuable to be used for many ornamental plants.

It is in the public gardens where the peonies are celebrated. Tree peonies are grouped with 3 to 5 or more of the same kind for a mass bloom effect. In these plantings of hundreds or thousands of specimens there is no need for inter-plantings of anything which would flower either before or after the peonies. Herbaceous peonies are planted in these gardens, often reserved for sunnier areas, as borders around walkways. The herbaceous peony does not hold the same exalted status, and in history they have been known as the “medical root”. In the past 40 years, more herbaceous peonies in China have been developed as an ornamental plants and valued as a bloom extender, since it blooms after the tree peonies. The overall effect of these all-peony gardens is a glorious, riotous bacchanal of fragrance and color for about 2-3 weeks, with the rest of the season a quiet sea of green shrubs. 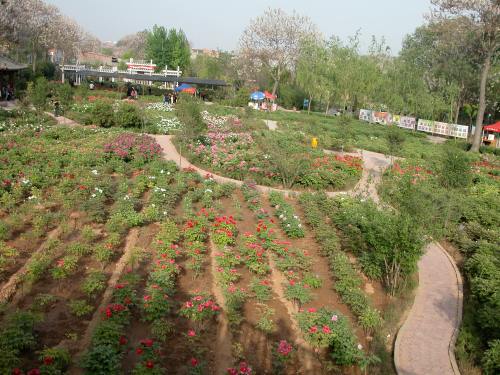 About ten years ago, The National Peony Garden in Luoyang was planted with thousands of tree peonies.

Mono-culture plantings of peonies in China are living museums to the national flower, preserving and showcasing some cultivars which have been propagated for almost a millennium. 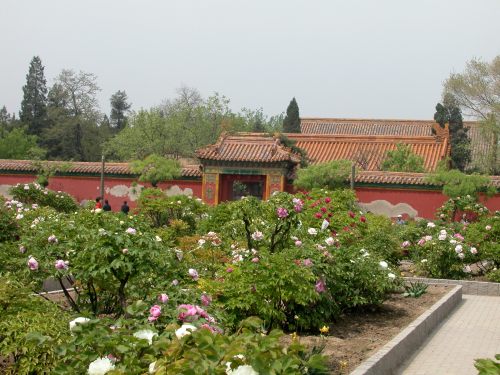 Tree peonies planted in the former imperial gardens in the Forbidden City, Beijing. 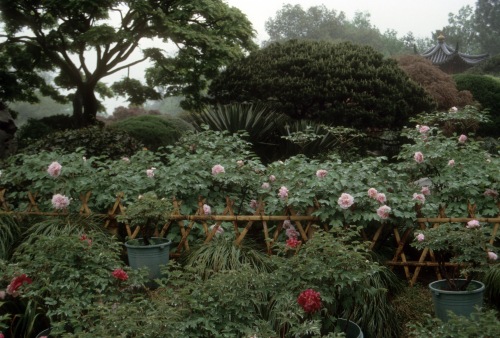 In this garden in Hangzhou the tree peonies to not face any competition from companion plantings aside from some mounding grasses and are beautifully contrasted by the background foliage.

Traditional tree peony gardens in Japan are similarly focused on the peonies, with very spare plantings of other plants.

A tree peony planting in Tokyo, 2013. Note that the peonies are planted in a slightly raised terrace. This seems to be a common practice in Japanese tree peony plantings. There are many good reasons to do this, both practical and esthetic. The tree peonies benefit from the excellent drainage afforded by the raised bed and the blossoms are displayed at eye level for all to admire.

In America, botanical gardens with peony collections have often planted them according to the Chinese and Japanese plan, in large groups which have an otherworldly visual effect and also serve to showcase these historical and culturally significant plants. 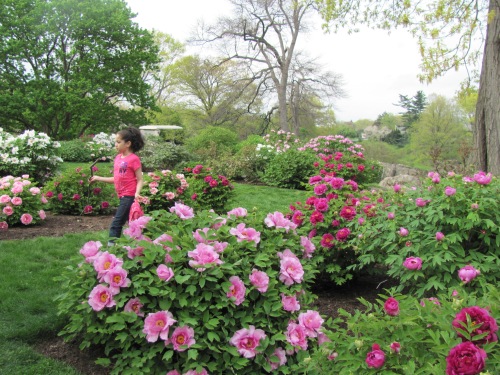 While it is not the scope of the post to begin a long treatise on design and influences of our modern American gardens, we in America are a motley group from all corners of the world, bringing our favorite plants with us when we can. Plants remind us of our homes and our history and our relations.

Countless people tell us that the peonies remind us of their grandmother, who grew them for decades. The rewarding thing about growing a peony, both herbaceous and tree, is that once settled in a good spot, they do thrive for a very long time, outliving countless perennials. They are survivors, and have a rich history intertwined with our growth and settlement.

A few species of herbaceous peonies are native to western Europe. The ancient Greeks recognized these as important medicinal plants and as gardens shifted from purely utilitarian, producing food and medicine, to ornamental, peonies remained part of the mix. The famous 19th century English garden designer Gertrude Jekyll advocated the use of peonies as part of mixed perennial border. Jekyll also designed gardens in the United States and her ideas were influential here. She drew her inspiration from an idealized notion of the traditional English cottage garden, that had a succession of bloom and remained colorful during a long growing season.

In this arrangement, peonies (usually herbaceous) play an important role in providing late spring-early summer color, but they are by no means the main attraction of the garden.

Herbaceous peonies as part of formal English garden, with lilies and roses interplanted. These shrubs and perennials will provide color after the peonies have gone to all green.

Another often seen treatment of peonies, again mainly herbaceous,  is to devote an entire border or bed to them. Herbaceous peonies make great plants for cut flowers.

Allowing three feet of width for each plant, borders are often one to three plants wide (3-12 feet) and of a length suitable to the overall size of the garden. These peony borders can be planted according to color, flower form, or fragrance. When planning a peony bed its important to keep plant height and bloom sequence in mind. Taller plants are kept to the back and early bloom varieties are interspersed with mid- and late season cultivars. This provides a balanced look which is colorful throughout the peony season.

Rather than following any set plan, many gardeners allow imagination and their own taste to guide their use of peonies in the landscape. 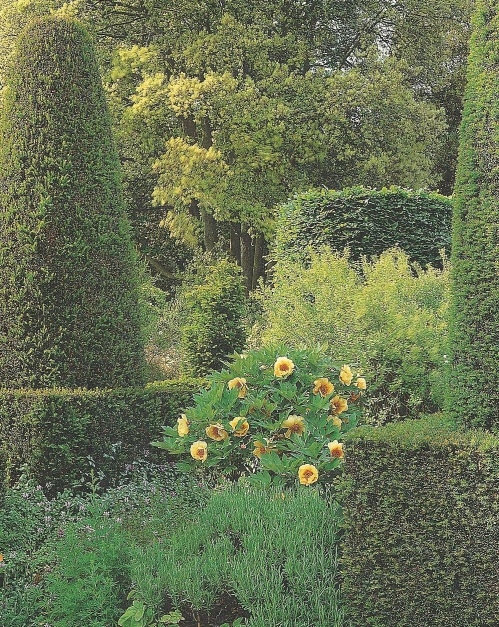 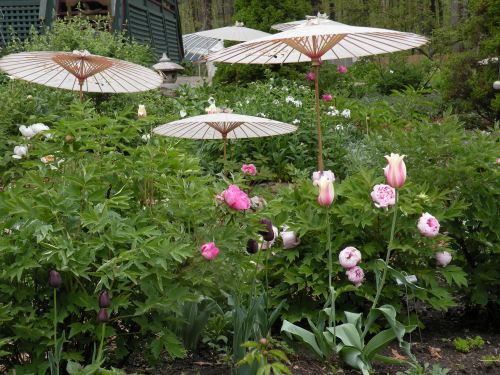 In parts of the garden, we do interplant spring bulbs which bloom with the tree peonies. These tulips bloom in May.

In some areas we have summer blooming perennials which provide color in July and August. Many different annuals can also be worked with into your peony bed, provided they are not too large to smother the peony plants.

In this shady area a tree peony grows with hellebores, pulmonaria and annual impatients. 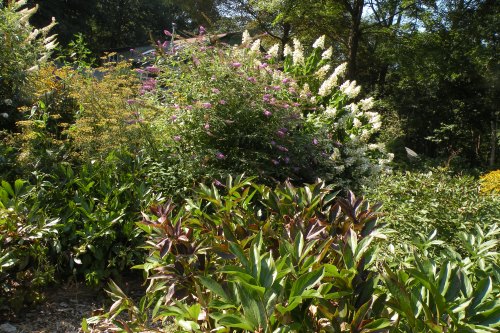 In this sunny area, herbaceous peonies grow backed by a tall border with bronze fennel, buddleia and hydrangea in full bloom in August.